NBW Tech Just How Close is the Aakash 4 to the Nexus 7?

Not even close. When the specifications of India’s low cost tablet’s latest version were released, some folks in the mainstream media called it similar to Google’s Nexus 7. Although they are similar in some aspects, like for instance both have a 7 inch screen or that both support wi-fi, it is grossly unfair to compare the two. Because the devil is in the detail. Let’s break down the specifications of the two devices and see why.

The Asus Google Nexus 7 has an 800 x 1280 pixels display with 16 million colors. In comparison, the Aakash is has an 800×480 pixel display with 65k colors. The Nexus device is far more superior to the Aakash tablet in this aspect. Neither does it have the pixel density or the color depth to match up to the Google device. The Nexus uses corning glass while Aakash recommends a screen guard.

The Nexus device has at least 16GB of internal storage whereas the Aakash specification is for 4GB or higher. If price is the key concern, we can reasonably assume that manufacturers will keep it closer to 4GB than go higher. On RAM, both seem to have 1 GB.

Government recommends a front facing .3MP camera while the Nexus 7 has a 1.2 MP camera. Big difference.

This is the most crucial part. While the government has said that the processor must meet certain standards, it has left it up to the manufacturers to decide on the processor. Without knowing what processor is going to be on it, or what chipset will it have, it is unfair to compare the two. It doesn’t look like the Aakash will have a powerful GPU either. Nexus 7 has four sensors including the accelerometer, gyro, proximity sensor and a compass while Aakash has been recommended a 3 axis accelerometer. This is a steep difference as well.

From what we know, the Aakash 4 must be able to play 3 hours of 720p video. This is almost a third of what the Nexus device is capable of. The Nexus 7 is said to be capable of playing 9 hours of HD video. Remember, the Nexus 7 has a much higher screen resolution and hence required more power. This will mean that the Aakash battery will be significantly lower powered when compared to the Li-ion 4325 mAh battery of the Nexus 7. 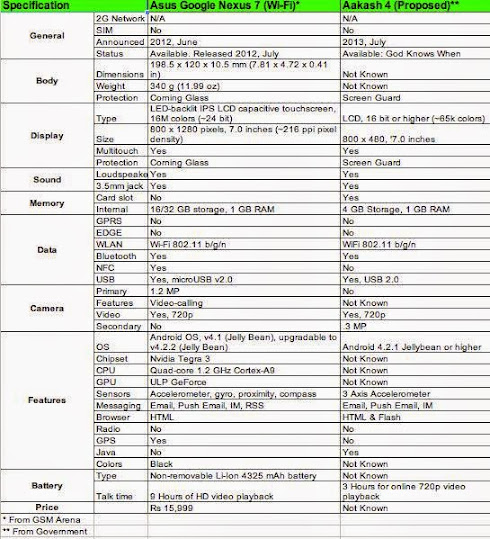