Google has finally opened up the developer preview of the Chrome web store to India (and 14 more countries).

Starting today, when you upload an app via the developer dashboard, you’ll have the option of selecting from the following sixteen countries to list your app: Argentina, Australia, Brazil, Canada, France, Germany, India, Italy, Japan, Mexico, Netherlands, Poland, Portugal, Spain, United Kingdom and the United States. If you are using Chrome Web Store Payments to charge for your app, you will also be able to set the app price for each country although if you’re not based in the United States you will not be able to complete your merchant account sign up just yet (this will be enabled soon). [official blog] 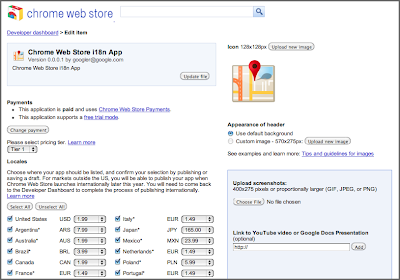 It’s important to note that these apps will not yet be published to countries outside the United States. This will happen when the Chrome Web Store opens to consumers in these countries later this year. What you see is developer preview ahead of the consumer release so you have enough time to prepare your apps for international users.