In partnership with Indiatimes, Youtube will webcast IPL matches they happen. Users can also view entire past matches and enjoy highlight clips of all 74 matches on Indiatimes’ YouTube Channel (www.youtube.com/indiatimes).

There will be 5 minutes delay in the webcast [source]. 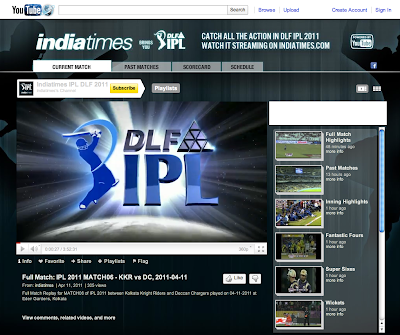 The Telecom Ministry is likely to cancel the licences of mobile operator Idea Cellular and Spice in five states for failing to roll out services within the stipulated time.

Telecom regulator Trai has recommended to the Department of Telecom (DoT) to cancel the licences of Idea in Karnataka and Punjab circles and that of Spice in Maharashtra, Haryana and Andhra Pradesh [source]

eBay India has partnered with the apparel brands such as Adidas, Reebok, Puma and Lotto Sports to provide cricket fans a one stop shop for the official Indian Premier League (IPL) merchandise from all 10 teams.

Micromax is launching bling2 very soon and images of the device has already been leaked. bling2 will run on Android, will have capacitive touch screen and will have WiFi Hotspot.

– Airtel and Aircel to launch iPhone4 in India

The Story of Visual Website Optimizer “Startups Are All About Markets”