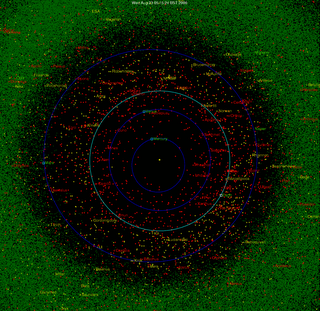 The image (on your right side) is an up to date map of the solar system displaying the orbits of the terrestrial planets and the estimated position of thousands of known asteroids.

This diagram is missing comets, space probes and, of course, the undiscovered asteroids.

There are over 300 known objects on Earth-crossing orbits, the majority of which are potentially capable of causing death and destruction on a scale unheard of in human history.

Related: 400 days in the Life of the NEO population | World Map of Sunlight and Moonlight |
How many planets are there in the solar system