[Guest article by Lakshmanan Narayan, founder of Eyes And Feet]

You’ve finally got that viral tweet! Something about your start up or product is finally tweeted by a high klout tweetaholic.You have your eyes glued to half a dozen screens that show you retweets, mentions and twitter searches for your company/URL/product/keyword. It looks great – for about 42 minutes, or at best a few hours. And then…Poof! 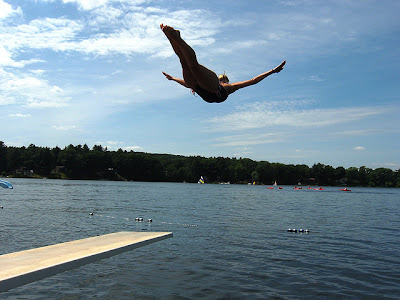 You head to bed, hoping to know that a resurgence in interest happened while you were asleep. The morning brings no great joy. It’s almost like, barring that 1 hour in the limelight, your ‘tweet de resistance’ never existed.
Don’t be disappointed! It happens to the best, as this tale of three tweets illustrates
Here’s what we did:

Here are the ones that we finally selected:
A) Periodic Table of the Elements
Over 2,500 mentions in a week!
This story debuted on August 21st, peaked on August 23rd and then dropped. Interestingly, there seems to be a second surge in interest – not unsurprising considering that it wasn’t initially tweeted from any well known account – guess it was just time before someone with more followers picked it up! Here are the numbers: 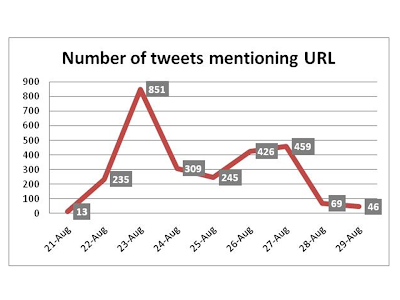 B) Why working from home is both awesome and horrible
Over 8,500 mentions in half a week!
This one was initially tweeted by @oatmeal. With over 80,000 followers and a reputation for posting stellar content, this is (almost) as good as it gets. Plus, this content isn’t time bound in any way- there’s no expiry date on its ability to elicit a chuckle. However, after peaking at over 3,000 tweets a day, the volume rapidly dropped to under 25% of that, as this chart illustrates. 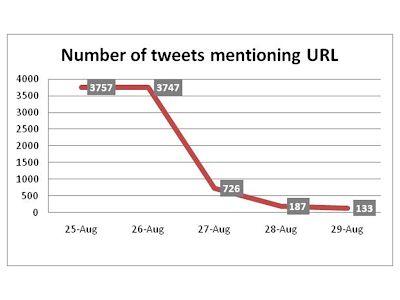 Moving to as good as it gets…
From the stables of someone who’s almost always trending on twitter: Justin Bieber!
C) Be a part of Justin’s Movie | Bieber Fever
Considering that this was encouraging people to apply for a role in Justin Bieber video, this is as viral as it can get. And how: over 25,000 mentions in half a week! Here’s how this one did – from when it first tweeted on August 24th. Don’t miss the super rapid decline. 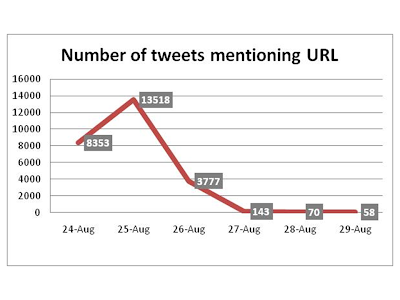 Admittedly, there is no rigorous statistical analysis on the above data. It’s fairly obvious, though, that tweet volume declines quite rapidly – to less than 50% of it’s maximum – in less than a day.