Narendra Modi, one of the most polarising figures of Indian politics has done it again. On August 31, he hungout on Google + and guess what? The two hour hangout was watched by 82,000 people live on YouTube from 116 countries.

Modi was the first Indian politician to debut on Google+ Hangouts. The Gujarat Chief Minister’s hangout was themed “Strong and Glorious India Long Cherished by Swami Vivekanand” and the team received close to 20,000 questions over the course of 3 weeks and millions watched across other media platforms,” said Google in a blogpost. 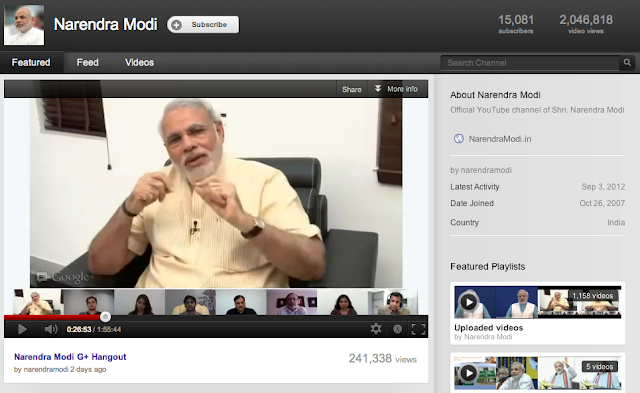 Earlier, US President Barack Obama, Australian Prime Minister Julia Gillard and others have hosted hangouts on Google +. According to the Google blog, political parties and organisations including the Ministry of External Affairs, Rajya Sabha TV and the Indian National Congress have used YouTube and Google+ for citizen engagement.

The right wing politician from Gujarat has been a polarising figure both in the online and offline world. A recent Time magazine poll had included Modi among others and it was one of the most hotly contested online polls of 2012.

Going by the social media buzz, do you think BJP politicians have embraced social media/technology better than Congress?

Aside, Google India  made a goofup as they earlier published ‘hangout was watched by close to 5 million people from 116 countries with 82,000 people watching it live on YouTube’, but later the 5 million data was removed from the blog post.