Witty shit happens all the time on social networks, in the form of status updates and comments on photos.. Now there is this service that can help those commenters monetize their creative one-liners by submitting them on thewittyshit.com. The best, original, and the wittiest wisecracks can be featured as T-shirt slogans or used as taglines for products and consecutively fetch royalties to the authors. A viral fame for the one-liner and its creator come along.

Recent IITD grads Harsh Snehanshu and Apoorv Jain came up with this idea during their seventh semester, incorporated thewittyshit.com last November, and have crowd-sourced a huge collection of such one-liners since. The thousands of wisecracks that are received on the site are open for ‘liking’, and the most popular ones make way to the T-shirts or are sold to ad-agencies to be used in jingles and campaigns. The Witty Shit’s services include conducting branding-cum-advertising contests for corporates for crowd-sourced punchlines, brand-names or advertising ideas. Some of the running contests can be seen here. 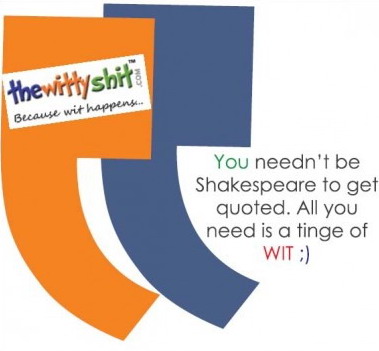 TWS is already popular; the duo had marketed over 10,000 wit-based T-shirts in over 65 colleges during their stay at IITD to generate revenue as well as to build their brand. Harsh and Apoorv are the only full-time people involved with it, but they have a team of 200 campus ambassadors in colleges throughout India who are helping in popularizing the witty merchandise. They also have a few part-time employees that get paid according to the business they bring to the table.
Corporate crowdsourcing was launched just 15 days ago on TWS, and it has already enticed six corporate clients and looking forward to two more this week. Apart from this, they are already in talks with LiveMedia and DNS to enter into a deal to provide them witty content. They are also diversifying clients by targeting authors, production houses etc who wish to use TWS’s branding-cum-advertising services.

Would crowdsourcing one-liners work apart from being printed on tees? Harsh, who had authored a book called Oops, ‘I’ fell in love before coming up with this venture, crowdsourced the title of his second book by launching ‘The Lazy Writer’s Competition’ on his Facebook fanpage to christen this second book Ouch, That ‘Hearts’.
With any creative content comes copyright issues. When asked about, Harsh says, “The legal aspects have been taken care of in our model by having a very strictly designed Terms and Conditions sheet, which ensures that we own the copyright of all the original content of the website and if the user posts copyrighted content, we get indemnified.”

Thewittyshit.com is facing a grave problem though, that of competing with its own Facebook page, note Snehanshu and Jain on the official TWS blog, even though the site looks closely similar to an FB page, the layout, colours, the ubiquitous Like button, and integrated Facebook commenting. The look and feel has to be improved to distinguish it from the FB page and build up a TWS brand. With no competitors in this niche space, investing on the UX may help increase come backs to the site.
The Witty Shit started off with an investment of Rs. 2.5 lacs n the kitty, and are planning to get into talks with investors next month onwards. “We are mainly marketing in the creative segment, amongst the bloggers and writers who will help create content. Not much focus to viral marketing as the plan to grow it “organically” before raising investment.”, says Apoorv.

The founders have realistic ambitions: they plan to extend literary creativity to artistic and other forms creativity and build a creative network for helping people come together, in the process help corporate clients crowd-source their specific needs. They also have plans to go into e-commerce with wit-based merchandise six-eight months down the line.

Using the aam aadmi’s otherwise wasted creativity seems a novel idea, but there is a long way to go. What do you think? Just because wit happens, can it be used to create interesting merchandise and a sustainable business?

Here is a quick QnA with TWS team:

Pi: What’s your ‘jugaad’ in brand/media agencies space? An idea like this (probably) works when one actually knows how to sell a random one-liners (?).

Currently we don’t have much ‘jugaad’ in the media agencies space. We are talking to people. What most of the advertisers are interested in with us is getting specific ideas crowdsourced rather than taking an already posted idea from the website. We are in discussion with people like LiveMedia and DNS to enter into a deal where we would provide them witty content.

Pi: Have you taken care of trademarks etc. related legal challenges in this model?

Yes, the legal aspects have been taken care of in our model by having a very strictly designed Terms and Conditions sheet, which ensures that we own the copyright of all the original content of the website and if the user posts copyrighted content, we get indemnified.

Pi: Why not just do a FB app (instead of creating a new destination site?)

We had this idea in mind but we believe that it would not be possible to move outside FB later on. The majority chunk of creative people are active on twitter and twitter login is what we are going towards in the near future, which wasn’t possible on the FB app. Also, we plan to go into e-commerce with wit-based merchandise six-eight months down the line and therefore a separate portal helps. We would be creating an FB app however of the basic version of the website, for the FB addicted users

Adds Ashish: TheWittyShit is an interesting concept – though I’d recommend the team to relook at their site vs. FB app strategy. Creating a ‘new’ destination site is a bigger challenge, as wit happen at random intervals (on one’s Twitter/FB page). Is monetization the only incentive for people to share their wits? The team can also look at creating leaderboards around specific themes?

On focus in business – lessons from Smartphone sales numbers