Soccer and Economics? Is there a correlation?

Yes, if you believe the economists at ABN Amro!
In a report titled “Soccernomics 2006,”(released March, 2006) Dutch bank ABN-AMRO predicted way back in march about the outcome of world cup – i.e. Italy’s victory.

Few interesting tidbits from the report:: 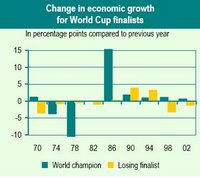 The report argues that the winning country enjoys an average
economic bonus of 0.7%, while losing finalist will suffer an avg. loss of 0.3%.
This is mainly to do with the *feel-good* factor – When people are happy, they spend more, party, buy sports merchandise etc (quite similar to short skirt theory).

Researchers have then putforth the logic behind why an European country needs all these *feel-good* in their economy?And specifically, why Italy!
~For a balanced world economic growth, it is necessary to have a European country win the world cup (strong domestic demand in an otherwise slowly growing european market will benefit the growing US and Asians market. )

The report almost-correctly filters from the 5 european countries (namely Germany,Italy, England, Spain and France), the ones who need an economic boost (i.e. Germany and Italy)

Germany’s host advantage, according to the report is actually a disadvantage – since Germany economy has already received a major boost (being a host, Germany’s economy has progressed and this has reduced the output gap), and hence makes Italy the economic favourite (or rather the only choice !) 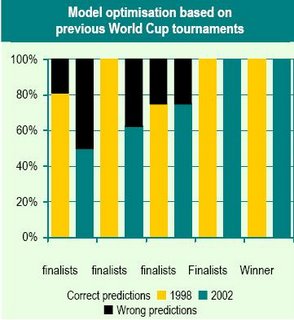 Concluding thoughts
And you think this research is a piece of joke?
Well, the research model developed by ABN economists has been able to successfully predict the winners since the last 2 world cups.

After all, economics too is about *game* theory!