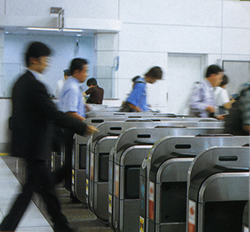 Well, we all know of different flavors of social networks- right from college friends to professional networking!. But how about a network which uses people power to generate electricity??

I am not kidding – the East Japan Railway Company is testing a system that generates electricity as people pass through the ticket gates.
How does this idea work?

The ticket gate electricity generation system relies on a series of piezo elements embedded in the floor under the ticket gates, which generate electricity from the pressure and vibration they receive as people step on them. When combined with high-efficiency storage systems, the ticket gate generators can serve as a clean source of supplementary power for the train stations.

With an average of 760,000 passengers using the station per day, the generated electricity will be enough only to light a 100-watt electric bulb for more than 10 minutes.
Though this experiment is a sort of ‘proof-of-concept’, what’s important is the vision of these guys!
Imagine such a system being implemented in India – with 5 billion passengers using the railways annually and more than 6 million on Mumbai suburban railway (per day), I am sure we will generate enough electricity to *shine* through!!
Mr. Lalu – you there?