A recent study by Adrian White (Analytic Social Psychologist at the University of Leicester) shows that Denmark is the happiest country in the world and Burundi in Africa is the most unhappy. 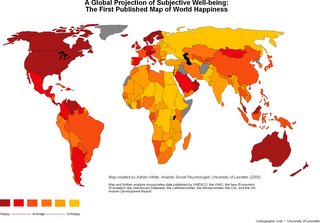 According to the study, happiness is found to be most closely associated with health, followed by wealth and education.

Few interesting findings from the report:

The frustrations of modern life, and the anxieties of the age, seem to be much less significant compared to the health, financial and educational needs in other parts of the World.”

It is also notable that many of the largest countries in terms of population do quite badly. With China 82nd, India 125th and Russia 167th it is interesting to note that larger populations are not associated with happy countries”

A recent BBC survey found that 81% of the population think the Government should focus on making us happier rather than wealthier.

Related: Simple Things that make life worth living | How Happy are you