Chaitanya, Kookoo’s Chief Architect (who was an integral part of creating a PSTN based cloud system for the first time in the world), is angry with the system.

How do we know? He says its probably the reason for his recent love for rock. Classical music, on the other hand, is not a favorite at all.

“My mind is not mature enough to handle the complex patterns in classical music yet. Hope I will be able to decipher that before I am too old.”

The other change, apart from rock, was the switch from Netbeans to Eclipse as the IDE of choice.

So does Netbeans have complex patterns as well? Turns out its probably the other way round – and for many, Netbeans is easier to navigate. As per this comparo on TheServerSide.com, “Turns out, timing has a lot to do with it.”

Chaitanya – like many of us – started coding during his engineering college days. But again, like many of us, engineering college was about getting through the 4 years relatively easily, and his real affair with code happened while he was working on projects for his MS at University of Florida (Imagine going to Florida and actually working! But that’s perhaps what sets geeks apart.).

“I worked on several projects including building the core for an object oriented database and an Automated negotiation system for a grid computing framework, O.C.E.A.N (Open Computation Exchange and Arbitration Network), a system where you can buy and sell computing resources. This was before the age of AWS. I also dawdled in building some fun projects like a GRE Vocabulary Builder in VB, an image manipulation program in VC++ etc.”

Yeah – those were the days. Folks used to create stuff on sourceforge, not apps 😐

So. A techie who worked on OCEAN projects in Florida and listens to rock. We can already imagine funky coloured bean bags, glossy wall-sized posters of – wherever your imagination takes you – and a dart board or two – is that what the office looks like?

Nope. Lean startup does what lean startup must. So good old cubicle it is. He did say its dull, so in a couple of years we look forward to some sprucing up there 🙂

1. Built a text to speech engine with my own voice (had to record 1024 English sentences of varying difficulty) and used it to make automated calls to my wife and play some automated romantic messages. (Note: This product is now not in production as the wife found out that the messages were automated and I had to make real phone calls to cool things down :))

2. Hooked up a web cam to a Pogoplug and used Motion (http://www.lavrsen.dk/foswiki/bin/view/Motion/WebHome) to build a Baby tracker to monitor the baby for example when I was out and the wife was in the kitchen. In spite of this my girl Dhriti did fall down the bed once. Not a software problem, more of user training (phew!).

Other details about Chaitanya: 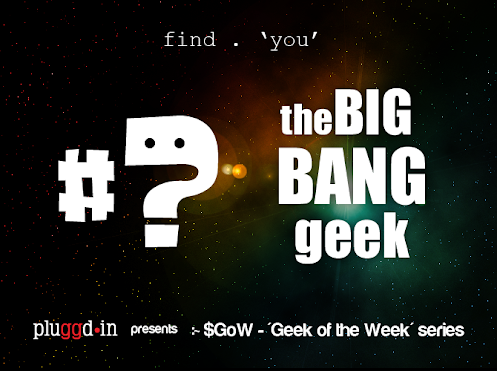 Entertainment: I have a Popcorn hour (recently upgraded to A-300) with a lot of custom apps. Actually, that reminds me, I have to build one for Pluggd.in TV 🙂 (There goes the geek again – build something if you can!)
Music while working: ShoutCast – any ambient channel. (Absolutely no risk of Indian classical complexity!)
Fav Apps: (Baited breath…) Android’s flashlight!!! (Arre – Nokia 1100 lena tha na!!) And manages media with NMJ Media Manager.
Lifesaver Hack : Gave up religion for now and says it saves a lot of time!!

It was nice talking to you Chaitanya. Enjoy the ride, and the rock. And we hope to see you at a kacheri someday 🙂

[the Big Bang Geek series is an attempt to showcase some of the coolest doers, hackers and geeks from India.]