With less than an average speed of 15 kilo-meter per hour, Bangalore’s traffic woes are legendary. The troubles may be too big for an app to solve, nonetheless, its worth a try.

IT consulting company Virbisol has joined hands with the Bangalore traffic police to create Traffic Genie, a free App which runs on Android and iPhone and updates real time traffic information.

The app, according to its makers, is like a community of road users where users report back the situation on the road to other users.

So if unfortunately you are the first one amongst the users to get into the congestion, you can just report the situation back. The traffic reporters operating from the Traffic Control Room will validate the situation, check the reason behind it and let every user know about it.

The free app on Google playstore has between 100- 500 downloads. (is also available on iTunes store). 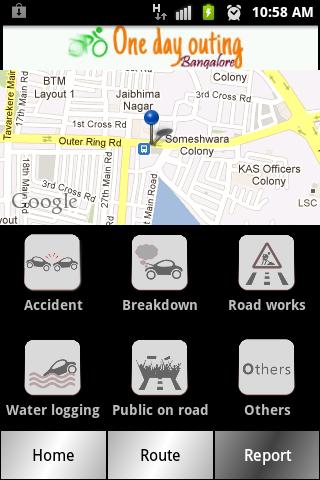 The race for real time traffic

Internet search giant Google recently rolled out live traffic updates for Indian roads on its maps applications (data powered by consumer’s GPS service). Airtel also launched SmartDrive app that enables users to view their location on a map and plan their route from one place to another.

Aside, the Bangalore traffic police is quite advanced when it comes to technology. They were the first to adopt Blackberries to enforce traffic rules. Though they recently abandoned the phones, they have plans to improve on the technology and make enforcement better with little human intervention. Cops in Banglaore have been using digital cameras, Automated monitoring systems and closed circuit television cameras to monitor traffic in the city.

Do give App Genie a spin and let us know what you think.